Steve To Appear At Anime Convention In Atlantic City

On Sunday September 16 I will be appearing at the J1-Con 2018 anime convention at The Showboat Hotel in Atlantic City, NJ!

I’ll be doing a Q&A session so bring all your questions about my recordings with Yoko Kanno & The Seatbelts on the soundtracks of Cowboy Bebop, Ghost In The Shell, Wolf’s Rain, Brain Powerd and a non-Kanno project – Sonic And The Secret Rings video game.

I’ll also be doing a signing session so bring all your CDs, DVDs, vinyl, cassettes – anything that I am performing on – and I will gladly mark them up for ya with my black Sharpie!

Steve Conte is an American musician, songwriter, guitarist, music producer, and lead singer of the band Steve Conte NYC worked with composer Yoko Kanno and lyricist Tim Jensen on soundtracks to various popular anime series. Those works include the opening theme to Wolf’s Rain, titled “Stray”, as well as the tracks “Heaven’s Not Enough” and “Could You Bite the Hand?”. All three appear on the OST albums. As a guest vocalist for the Kanno-led Seatbelts, Steve also sang vocals in episodes of Cowboy Bebop, as well as the 2001 film, most notably the song “Call Me Call Me”, as well as “Words That We Couldn’t Say”, “No Reply” and “Diggin’”. He also sang “Rain” on the OST CD, which is sung by Mai Yamane and featured in the series.

He would later sing alongside Shanti Snyder on “Living Inside the Shell”, the ending theme to 2004’s Ghost in the Shell: Stand Alone Complex 2nd GIG. Conte also performed on the duet “The Garden of Everything” with Japanese singer Maaya Sakamoto on her RahXephon-related single “Tune the Rainbow”. In 2007, Steve provided the vocals for the video game Sonic and the Secret Rings. He sings the closing credits song titled “Worth a Chance”, as well as the game’s main theme “Seven Rings in Hand”.

PLUS: Interview with Steve Conte

“So much on offer in terms of Rock ‘n’ Roll chops, it was great to see this recognised by a London sold-out show.” – Dawn Osborne

In early August, Steve and his band of flying Dutchmen will make their way across the North Sea to the UK to play the following shows in support of his latest single – “Gimme Gimme Rockaway” b/w “Mercedes Benz” on Wicked Cool Records:

Thanks to the The The Asbury Park Press & Alex Biese for this…but most of all, thanks to my mom Rosemary Conte for teaching her children well… 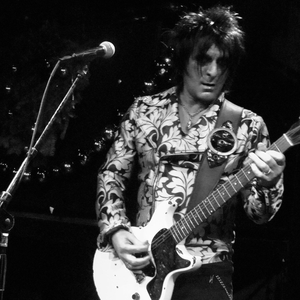